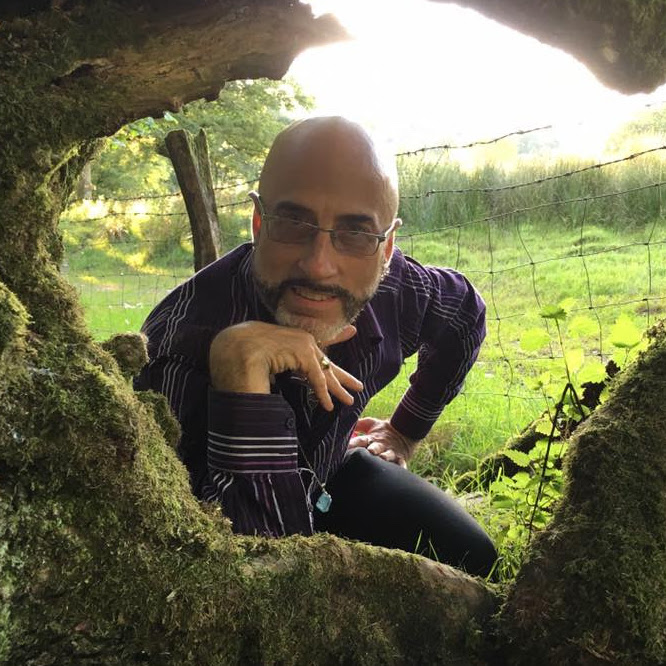 Orion Foxwood is Traditional  witch, conjure-man and faery seer; and, the author of “The Faery Teachings” (RJ Stewart Books), “The Tree of Enchantment” , “The Candle and the Crossroads” and “The Flame in the Cauldron” (Weiser Books). He was born with the veil (the second sight) in the Shenandoah Valley of Virginia, where he was first exposed to faith-healing, root-doctoring, faery lore and the second-sight practices of southern and Appalachian culture; and he has continued learning and teaching these spirit-doctoring practices in workshops, intensives and lectures in America and other countries. He is the founder, and primary instructor, in the House of Brigh Faery Seership Institute, where he teaches a multi-year teaching program in the “Tree of Enchantment” lore, practices, traditions and skills. He is a co-founder of Conjure Crossroads (CC), which is a collaboration between five (5) seasoned root-workers and witches focused on preserving and promoting the healing and helping benefits of southern root-work, witchcraft and other folk traditions. CC hosts the annual Folk Magic Festival in New Orleans. He co-directs Conjure-Craft and the  annual “Meeting of Magical Minds” symposium in Santa Cruz, CA . He is the Founding Elder of Foxwood Temple, a coven dedicated to passing on the traditional witchcraft of his elders. He holds a Master’s Degree in Human Services. His website is orionfoxwood.com.

Casting the Golden Cord: A Magical Technique for Conscious Co-Creation.

You were born to paint the truth of your spirit onto the canvas of form-not to be trapped in another’s painting.

Magic in its many forms has been a part of the human experience for millennia, despite attempts to demonize and destroy it. In its journey to the present, magic has had many roles and ways it is described and defined. These definitions have been both helpful and harmful to workers. Each definition reflects the politics, and beliefs of the time as well as the temperament and philosophy of the writer, who in the past, may not be a practitioner nor a sympathizer. Thus, the magic continues its forward march to define and refine itself through us, its workers. Today, more than ever, we the witches, magicians, druids, shamans, etc. are the shapers of magic, and its role now and unfolding in the future.

How we define magic shapes everything about it.  It is a worthy effort for workers to adopt, adapt or develop their definition. Without this, magic can be scattered, ungrounded, and vague and that weakens its effectiveness. To this end, Orion developed one for his eco-magical Faery Seership work: “Magic is the art of conscious co-creation, leveraging the visible to the invisible and the invisible to the visible”.  It is human-inclusive, not human-centric to address the core wounds that are damaging each other and our planet. From this definition, Orion and Brigh have developed  “Casting the Golden Cord ” as a potent magical technique building on traditional magical techniques but responsive to what he calls the “co-creative call to action for the restoration of the earth”. In this workshop he will share: